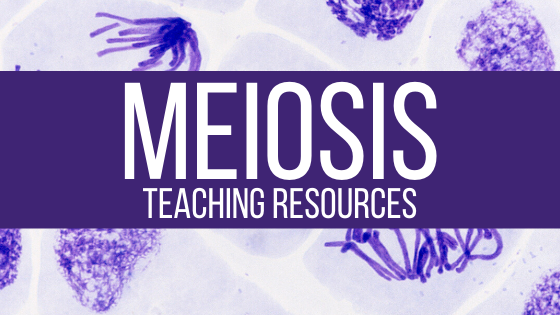 Meiosis is an important process that occurs in sexually reproducing species. Its purpose is to create gametes, which are special cells contain only half of an individual’s DNA. In humans and many animals, meiosis creates gametes called sperm and egg. In plants, these gametes are called pollen and seed. Gametes eventually combine with another gamete from an individual of the opposite sex to form a zygote, or fertilized egg.

Meiosis and mitosis have many similarities. They both begin with interphase, in which the cell copies its DNA. They also both include the phases: prophase, metaphase, anaphase, telophase, and end with cytokinesis. Unlike mitosis, though, meiosis requires two divisions. The first division (called meiosis 1) does not reduce the chromosome number; the cell would still be considered diploid. After the second division (meiosis 2) the chromosome number is reduced by half and the cell is now haploid. Mitosis is a form of asexual reproduction, and is intended to maintain the number of chromosomes in a cell. Mitosis results in the formation of identical daughter cells. Meiosis, on the other hand, is a process that prepares for sexual reproduction. Meiosis seeks to increase genetic variety as much as possible which helps the species adapt to changing environments. Let’s look closer at two ways meiosis builds in genetic variation to the gametes it produces:

Crossing Over: During meiosis, a special process occurs in prophase I. Crossing over is a process in which homologous pairs of chromosomes exchange some of their DNA. This further increases the genetic variety present in the gametes produced.

Independent Assortment: In anaphase I, the homologous pairs are split apart. Which chromosome goes to which side is completely random, further increasing genetic variety.

Metaphase I: Homologous pairs line up at the cell’s equator.

Anaphase I: Spindle fibers pull each of the two homologous pairs to opposite ends of the cell. Unlike mitosis, sister chromatids are not split apart.

Telophase I: Chromosomes are now at opposite poles of the cell. Depending on the species, the nuclear membrane may reform and the chromosomes uncoil. In other species, these steps will not happen since the whole process is about to begin again. At the end of telophase I, the original cell splits into 2 new cells.

Prophase II: Cells begin their second round of meiosis without replicating their DNA. In prophase II, the nuclear membrane dissolves again and DNA condenses.

Metaphase II: Chromosomes align at the equator of the cell.

Anaphase II: Spindle fibers pull sister chromatids to opposite ends of the cell. The centromeres are finally broken.

Telophase II: Both cells divide, creating 4 haploid cells. Each cell has exactly one half of the original cell’s DNA, or one of each homologous pair.

Learn more about how I plan my unit on the cell cycle here.

A 6 page practice with in depth descriptions of the stages of meiosis, summarizing questions, and a graphing extension.

A best selling 4 page webquest that allows students to dive deeper into the topic on their own.

Great way for my students to remember the differences between mitosis and meiosis. Plus, they love the coloring. Thank you for a great resource!