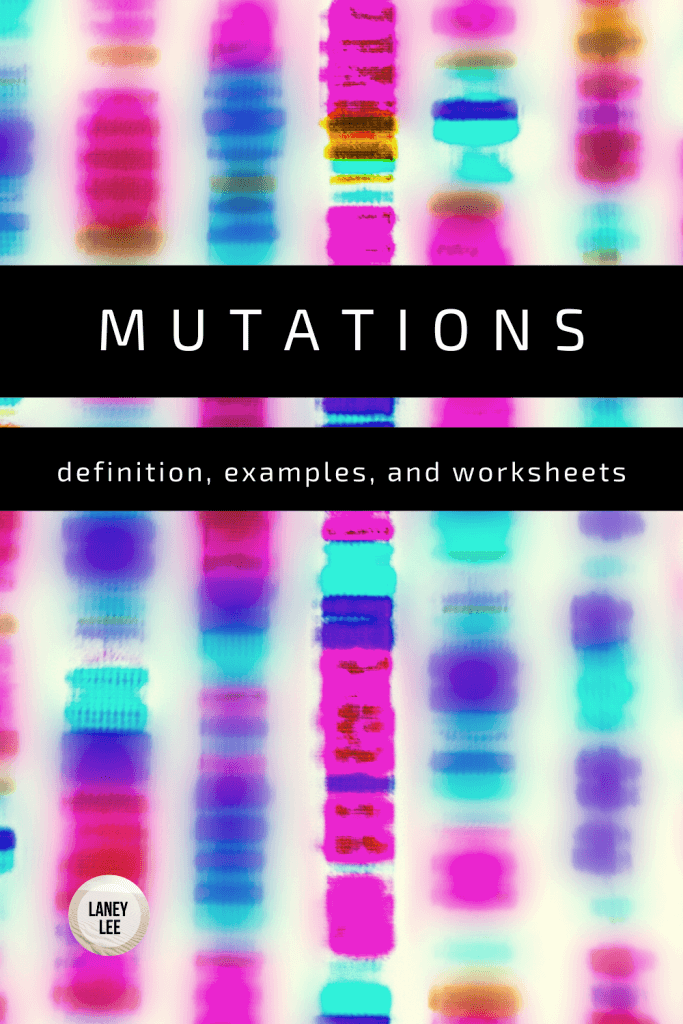 ** If you’re here for a mutations worksheet, scroll to the bottom of this page. **

Within each of your trillions of cells, you have a full set of your DNA or your entire genetic code. That DNA is about 2 meters long, and 3 billion nucleotides (the coding letters) long. The DNA is split into 46 different pieces known as chromosomes.

It’s not difficult to believe that mistakes can, and often do occur in this replication process. Those mistakes are known as mutations, and they can be harmful, helpful, or create no change at all.

The smallest mutations are gene mutations. These occur when only one or a few nucleotides are copied incorrectly. Take a look at the 3 kinds of gene mutations below

Additionally, the affects these mutations have on the gene they affect varies. Gene mutations can be categorized again based on the outcome they cause.

Sometimes, mistakes can occur in an entire chromosome. These mutations are obviously more likely to have dramatic affects on the individual due to the fact that many genes are affected.

An inversion results when a segment of a chromosome is reversed end to end.

A deletion results when a segment of a chromosome is lost.

A duplication results when a segment of a chromosome is copied.

A translocation results when a segment of a chromosome breaks off and attaches to another chromosome.

It’s important to remember that mutations can be harmful, helpful, or cause no change at all. All living things have DNA, so therefore all living things can have mutations. Below are a few examples to get you started.

First, gene mutations. A change in one single nucleotide results in a disorder known as sickle cell anemia. This disorder is characterized by sickle shaped red blood cells, which do not hold oxygen as well as normal blood cells. This can lead to pain for the affected individual.

Second, chromosome mutations. A duplication of chromosome 21 results in a disorder known as Downs syndrome. It can result in mental difficulties and some telltale physical symptoms.

You may have thought that lactose INtolerance was the mutation, but in fact, it’s the other way around! The ability to digest cow’s milk is a helpful mutation that originated in Europe and has been passed down from parents to children.

Red hair is a mutation that originated in Scotland or Ireland. This mutation does not hurt or help those who inherit it. Remember that not all mutations create problems!

This is my most comprehensive mutations resource with over 6 pages. Perfect for distance learning or creation of independent work packets, this resource comes with a digital version and answer key.

Get it directly from me or through TPT.

Get this basic practice worksheet to review mutations.

This quiz includes multiple choice and fill in the blank options for assessing student knowledge.

This best selling, classic project is a fan favorite! Students will research and present about a genetic disorder of their choice.