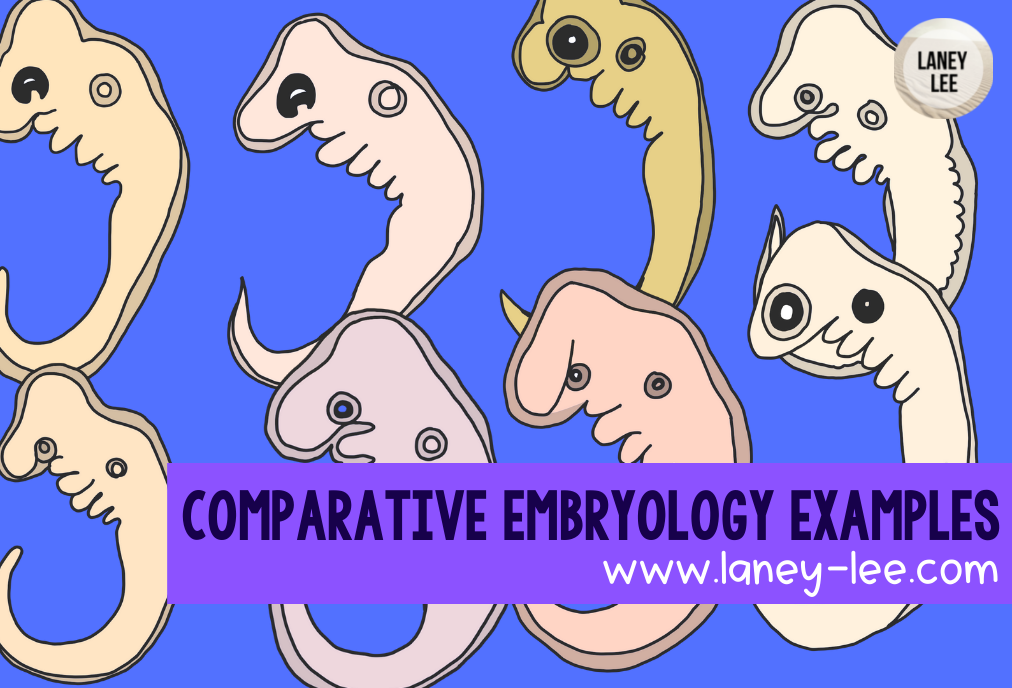 Looking for examples of comparative embryology? Read on!

How does comparative embryology support the theory of evolution?

According to Darwin’s tree of life, sometimes called the phylogenic tree or cladogram , all species share a common ancestor. That means that any two living things share a great-great-great- great (VERY great) grandparent. For species that are closely related, their common ancestor is thought to be relatively recent. Even species that look quite dissimilar, though, are still believed to share an ancestor somewhere in the very distant past.

Although their adult forms are different, Darwin believed the striking similarities between the still-forming embryos of many species to be proof of their shared ancestry. The study of these developing forms is known as embryology.

The reasoning behind this assumption is this: If DNA determines physical development (and two species which are closely related have more similar DNA), then similarities in early stages of life indicate similar DNA and close evolutionary connections, even if those similarities aren’t evident later in life.

Confusing? Try your hand at comparative embryology by examining the 8 example species in the image below.

Below you can see 8 early stage embryos, each belonging to a very unique species. See if you can tell which is which from this list of species: pig, human, fish, salamander, chicken, tortoise, calf, rabbit. (Answers at the bottom of this page.)

Difficult? Despite their differences, one thing all of these species have in common is their backbone. That’s right, they’re all vertebrates. Interestingly, all vertebrates develop pharyngeal slits at the earliest stages of development. These slits are the beginnings of gills, which would give the individual the ability to breathe under water. In most vertebrates, though, these slits disappear as they develop. Their presence, though, is thought to be evidence that all vertebrates are distantly related to the first vertebrates: fish. All of the embryos shown above have pharyngeal slits.

Additionally, you can see that all the embryos below have evidence of a tail. This, too, will disappear in certain species as they continue to develop.

These examples of comparative embryology lead scientists to believe that even though these species look quite different as adults, their similarities in their embryonic stage indicate how much they truly have in common at a genetic level. Try again, this time with stage 2 embryos. Again, there are one of each of the following: pig, human, fish, salamander, chicken, tortoise, calf, rabbit.

Our little embryos are growing up! In the image below, you’ll notice that many of the features that were common to all the embryos at the earliest stages have disappeared. Now the embryos are beginning to resemble their adult selves, and some of their evolutionary connections may not be as evident anymore.

How does comparative embryology support evolution?

Evolution, or the idea that species are changing over time, is supported by evidence from the study of embryos, called embryology. Although the adult forms of many species look quite different, many similarities in their early development lead scientists to believe that this is could be proof of shared DNA and, therefore, shared ancestry.

Embryology is the study of embryos, or unborn offspring. The striking similarities between the still-forming embryos of many species is considered striking evidence in favor of the Theory of Evolution. The study of these developing forms is known as embryology.

Unsure about purchasing an Embryology Worksheet?