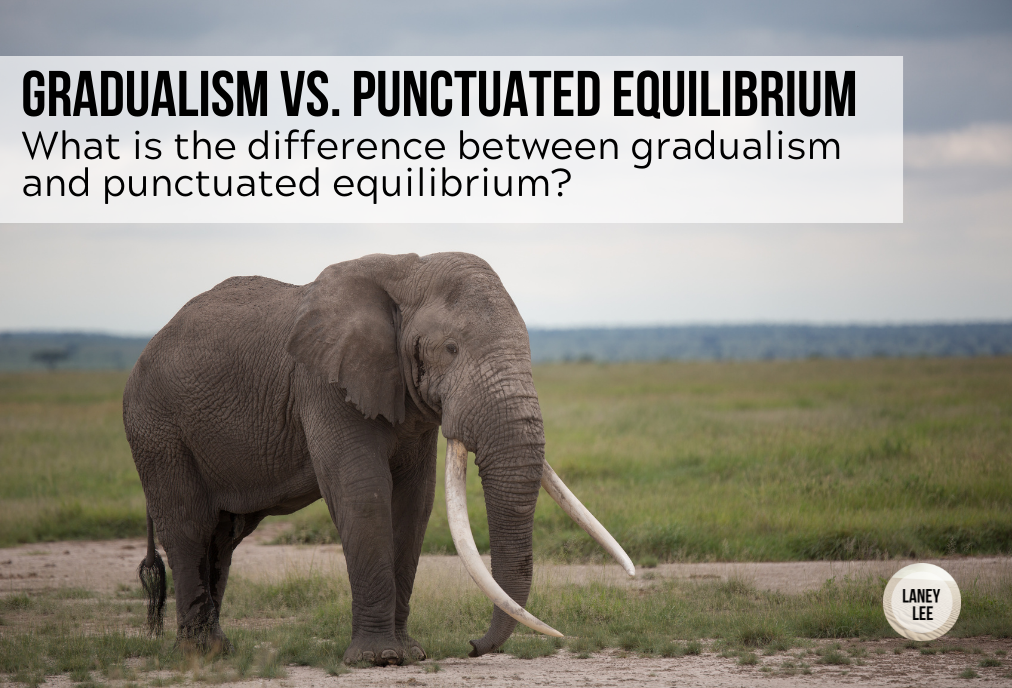 To understand the differences between gradualism vs. punctuated equilibrium, we must first learn what evolution is.

Evolution is a theory first proposed by Charles Darwin. Based on the study of genetics and inheritance, along with good old fashioned observation, scientists have agreed that species change over time as they inherit traits which hopefully help them to survive in their specific environment. Each generation is slightly different from the last as each new set of parents pass on their genes and traits to their offspring. This process of changing over time is called evolution and it ensures that species are able to adapt to their changing environments.

Let’s take a look at two models of evolution: gradualism and punctuated equilibrium.

Traditionally, evolution has been thought to occur slowly over thousands or even millions of years. This model of evolution is known as gradualism because it represents the gradual process of a species morphing into another species or a different form of the same species.

For example, take a look at the images of the horses and their hoof structure in the images below. These images represent the horse fossils which have been found dating back hundreds of thousands of years and science’s best idea of what these animals may have looked like with all of their skin and fur still on.

If you look at the hooves, you’ll notice that the horse has evolved from having multiple “toes” to one single “toe” which is the hooves that we know of in horses today.

Horses, however, aren’t the only species to have gradually changed over time. Without gradualism, the hundreds of dog breeds which we see today would be impossible. Remember that all dogs are simply the great, great, great grandchildren of wolves! Humans have helped them evolve by allowing individuals with preferred traits (like friendliness, loyalty, and cuteness!) to reproduce and preventing individuals with less desirable traits from having puppies.

Similarly, we can trace our own gradual evolution from our ape-like ancestors by observing the subtle differences in fossils that have been uncovered. In the image below, you can see how our jaw, forehead, and skull cavities have changed over millions of years to take the shape that they have now.

To conclude, it’s important to remember that gradualism is a very natural and reasonable process. Just as every person alive today is different from one another, so are we different from our ancestors. Everyone inherits a slightly different combination of DNA that results in a slightly different traits from everyone else on Earth, including your closest family members! These slight differences can accumulate over time to cause a species to look quite different after many thousands of years. Add to that the pressure of a changing environment (For example, if a climate is getting colder, thicker fur may be more useful for survival.), and you can easily see how a species can evolve through the process of gradualism.

Scientists proposed the theory of punctuated equilibrium based on fossils they discovered.

Sometimes, a species will have certain traits in one layer of rock and drastically different traits in another nearby layer. Scientists know that the closer together two fossils are, the less time has passed between their formation. Therefore, scientists have concluded that there must be another way species can evolve that does not require millions of years to make big changes to an organism.

Fossils are one thing, but until this phenomena could be observed in a modern organisms, many scientists would remain skeptical.

The poaching of elephants in Africa proved to be final piece of the punctuated equilibrium puzzle. Elephants are being killed for their tusks which understandably poses a serious threat to the survival of their species. As a result, up to 30% of elephants are now being born without tusks when, only a few years ago, the rate was closer to 4%. Clearly, these changes are not requiring thousands of years to spread to the entire elephant population. By studying these elephant populations, many people are becoming believers that evolution can occur more quickly than previously believed, through the process of punctuated equilibrium.

What is the difference between gradualism and punctuated equilibrium?

The difference between gradualism vs punctuated equilibrium is primarily based on time.

In gradualism, evolutionary changes take thousands or millions of years to occur. Tiny changes from generation to generation add up to large differences only after hundreds of generations.

On the other hand, punctuated equilibrium is the process of large evolutionary changes over a relatively short (1-3 generations) amount of time. Although punctuated equilibrium is harder to accept based on the laws of inheritance that we understand, it has been proven possible through the fossil record and, in modern times, through the evolutionary response of elephants to poaching pressure.

Put your learning into action with these time saving resources! All of my resources are teacher tested and approved! Each of the resources listed below includes an answer key, and many come with a digital version to support virtual learning.

Get free science resources delivered straight to your inbox by signing up for my newsletter! I promise to never be spammy. I’m just a regular teacher who likes helping teachers teach and students learn.

If this article on gradualism vs punctuated equilibrium was helpful to you, leave a comment with your age (if you’re a student) or the number of years you’ve been teaching (if you’re a teacher)!