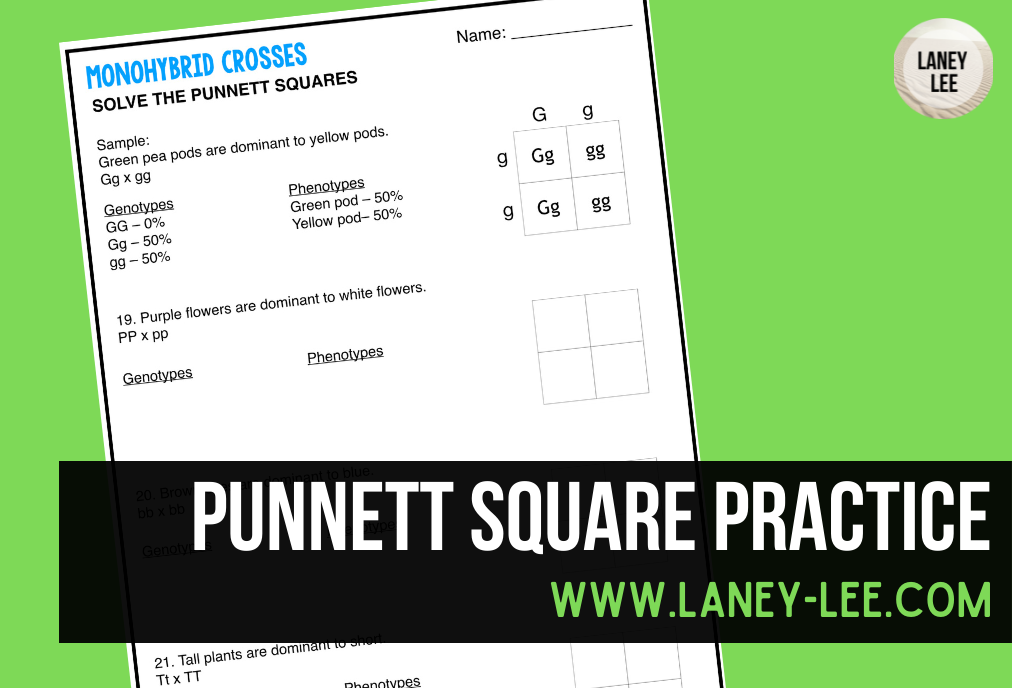 Before we get to the Punnett square practice, let’s first learn a little key vocabulary that will help us solve the problems.

It’s been understood for centuries that children resemble their parents, but modern science has continued to seek to unravel the secrets of inheritance. We all have traits, or characteristics, that we received genetically from our parents. Genetics is the study of heredity and how traits are passed from parents to offspring and heredity is the process by which those traits are passed.

In genetics, only sexually reproducing organisms are investigated. We already know that in sexual reproduction, each parent gives one half of their DNA to the new offspring. Which half though? That’s what genetics is all about. We can’t say for certain, but when we know the parents genetic information, we can use that to predict the probable genetic outcomes of the child too. A parent or offspring’s genetic make up is known as their genotype. The genotype is usually made up of two alleles for each trait (one from each parent). The physical traits you can observe in an organism is their phenotype. Phenotype is the result of the genotype.

We know that we inherit two pieces of information for each trait because we have two parents. These forms of a gene are known as alleles. Most traits have two or more forms, or alleles. Alleles are usually represented with capital and lower case letters, such as B and b. A capital letter indicates a dominant allele. Dominant means that this allele is powerful and can mask the presence of other alleles. Genotypes of BB or Bb will express a dominant trait. A lowercase letter indicates a recessive allele. Recessive means this allele is weaker, and will only be expressed when no dominant allele is present. Only genotypes of bb will express a recessive trait.

Using the paragraphs above, determine the word that matches with each definition.

Take a look at the sample question below before solving the following questions:

The first step in solving a Punnett square practice question is to determine the parents’ genotypes and which trait is dominant and which is recessive. The question will always give enough clues to make this possible, but in this question, the parent genotypes were given and the question also informed us that green pea pods are dominant (and therefore represented with a capital letter) while yellow pea pods are recessive (and will therefore be represented with a lowercase letter).

Next, fill in the interior boxes of the Punnett square by writing the two parent alleles which are directly to the left and directly above each box. Typically, the capital letter is written first.

For each of the following Punnett square practice questions, list all possible genotypes and phenotypes of the offspring.

4. Predict the genotypic and phenotypic outcomes for the offspring of a cross between two heterozygous tall pea plants.

5. In pea plants, purple flowers are dominant to white. A purebred purple flower is crossed with a white flower. Predict the genotypic and phenotypic outcomes.

6. A heterozygous black fur rabbit is crossed with a white fur rabbit. Predict the genotypic and phenotypic outcomes.

7. A heterozygous round pea is crossed with a purebred round pea. Predict the genotypic and phenotypic outcomes.

Get free science resources delivered straight to your inbox by signing up for my newsletter! I promise to never be spammy. I’m just a regular teacher who likes helping teachers teach and students learn.  Check out my TPT store to see more of my work!

If this article was helpful to you, leave a comment with your age (if you’re a student) or the number of years you’ve been teaching (if you’re a teacher)!